It is said that when we lose a friend, there is a new star in the sky at night. On these cold, bleak Winter nights I look up, and through my tears I see the stars of a constellation twinkling in the sky. I hope your spirits run free, dashing and playing in meadows of sweet timothy grass, with cool waters to sip and sweet fruits to nibble and play with. May you have places to explore, treats beyond measure, and cardboard to nibble.

To all our gentle beloved piggies, we will always love you. 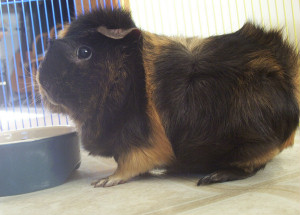 We are thankful that you woke us up on your final night, letting us hold you. We told you with our hearts that you could go now, feeling your last three breaths. We know you are in a better place now, a place with no cages, no worries, and no sadness. We will see you again our little baby, at the Rainbow bridge....

Amy, you started our love for guinea pigs, and we will never forget you. We love you and miss you so much
Bye, bye our sweet Chunky 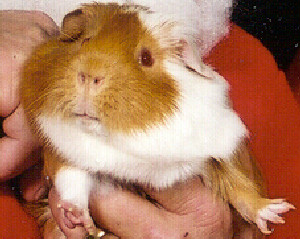 You were my best friend, and I hope that you know how very special you are. You touched my life in a way I never would have thought possible. You were more than a pet, you were my little baby. I remember picking you out of the litter - you were the tiniest - but you grew to be the biggest piggy I'd ever seen or have since. I think you grew so big because your giant heart couldn't be kept in anything smaller. You were so sweet and funny Chekov, you'll be missed so much. Be well until I can make it to the Rainbow Bridge to pick you up!

I know you had heart problems and only lived a few months, but i loved you more than you could imagine (and still do)! My heart has been broken ever since i left the vet's office on the day we had to put you "to sleep"! I hope you loved me alot! I still remember the times you'd hop on my lap and lick my nose. And the times you'd purr as I would pet you, and when you would run around in your ball! I miss you alot, but i know you are in a place where your heart is working, and your lungs won't fill with liquid (the reason i had to put you "to sleep"). I hope you have a wonderful time in the fields by the Rainbow Bridge, and eating all the oranges you want (your favorite food)! 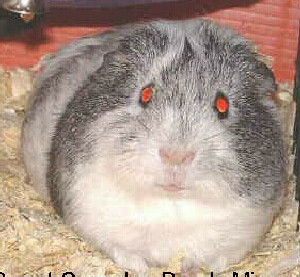 Cupcake, my beautiful boy. You were the sweetest pig ever. You loved to cuddle, even knew your name. I'll miss all of your piggie antics ever so much. You held onto life until you could hold no more. I told you it was alright for you to go as I held you in my arms those last few hours as I knew this was the end and you would be leaving me to make your trip to Rainbow Bridge. I hoped and prayed as I took you to the vets almost on a weekly basis that you would make a turn for the better. I syringed fed you day after day trying to keep weight on you until you would no longer accept the food. It just broke my heart to see you those last couple of days. I am sorry I was selfish and tried to keep you with me for my sake. I knew you were miserable and unhappy. I hope you know that I love you and miss you so very much. I am heartbroken without you. I'll never forget you, my sweet Cupcakers. Enjoy all the parsley at Rainbow Bridge.

Silver and white like glitter in the snow
You came into my life simply so
At the time I didn't know
You would secretly steal my heart
Now you have to go, and all so soon
Our time together was just too short
I'll never forget all the wheeks and cute squeaks
Nor your begging little eyes
It is now time for you to fly
So go, I'll say my goodbyes
One day, we'll meet again
When it is my time to greet you on the other side.

I'll love you always and forever you will be in my heart.

Until we meet again my little man. 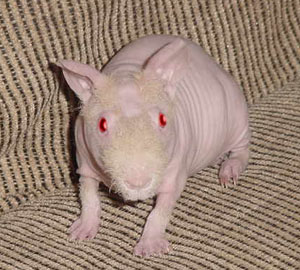 Hey little buddy, I wanted to write to you to say goodbye. You left me today and I know that you are in a better place now. But it still doesn't make it easy. I miss you already. I missed you the minute I left you at the vet. And I especially missed you when I went past your room at lettuce time tonight. There's no more squeaking, and I never knew I'd miss that so much. You were my little buddy moomoo for almost 5 years, and you were the best little friend to me... you were a sweetheart. I knew I had to be the best mommy to you because you were 'different' and you needed extra love. And I grew to love you so very much. Don't ever forget that different is beautiful and wonderful, and remember that forever. I hope you will see our sweet Muffin and the babies over the rainbow, and I hope you will all live happily ever after, with eternal lettuce and all the songs you loved so much. Don't forget me buddy, because I'm going to see you again someday... I love you so much and I'll miss you so very much.

Read
A Tribute To Iggy Entitled
I Didn't Know

Slamson passed away on January 27th. He was born the same year (1997) the Sacramento Kings went to their first playoff game, thus Slamson was named after the Mascot. His mama and daddy were great pigs too. He grew to be the sweetest pig ever. He ended up living with Tequila (an adopted bunny). They became the best of friends (like the Blockbuster Commercial). Slamson would squeak when Tequila was taken out of the cage. When they both were out wandering, Slamson would follow Tequila. They cleaned each other and just loved each other so much. It was such a great relationship. We miss Slamson so much, but we know that he is in a better place. He lived nearly 8 years, so we know he had a long great life. The house is quiet without our little squeaker. May God Bless his little soul. 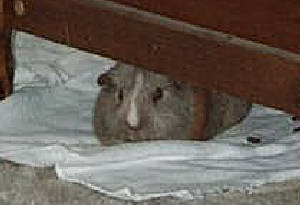 I had him much longer than most but not long enough for me. When I got home from work he was always ready for a game of tug-o-war and a scratch on the nose. a large tumor finally did its thing. when he wouldnt even eat his favorite green pepper i knew it was time. the days and weekends are much longer now. he is sorely missed. 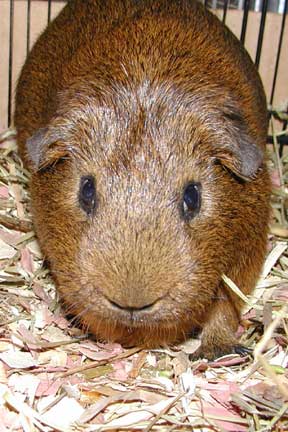 Cappy was a Father's Day present in 2000 from my oldest son Vinnie. He didn't whistle much, but was
always very happy to greet you. He loved to bite his bars and bang his water bottle when he wanted a treat. He loved green beans, parsly and even an occasional cheese tortellini or glazed donut. It too quiet without you Cappy.

We'll all miss you. 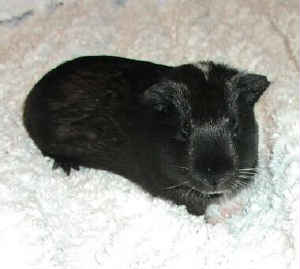 Four weeks ago next Monday we took Oreo in to KSU vet to try and clear up his skin problems before they got worse. They found skin mites and gave him a shot then and the following Monday. He got amazingly better. His skin cleared up and he gained a bunch of weight. He was chirpy and happy again. We then took him in Thursday for his last shot, and the vet wanted to check out a lump on his throat that was behaving strangely, so we agreed and the vet removed the lump and sent him home, groggy and lethargic, presumably from the anasthetic. Friday morning he was really lethargic and not improved at all, so we took him back to the vet and they pumped him up with medicine, but he didn't improve. We went to see him at 5:30 or so and they brought him out and the doctor had some encouraging news: she had taken blood and it looked like his thyroid function was way off, so they were going to start giving him calcium and other drugs to boost him up. He tried to get up to go to Sara but couldn't, so she picked him up and he calmed down and curled up on her. Shortly after the vet left the room with him, he died. He was only 2 and a half years old.

We love you oodles & gobbies little angel boy
and will miss you 'till we
cross the rainbow bridge
to be with you again.

In loving memory of my piglets.

Thank you to everyone who has offered their support and advice to help Angel through her injuries. I followed your advice and tried to syringe her feed crushed pellets, baby food, pumpkin, water, pedialyte, and aspirin but it was too little too late. Unfortunately, because of my inaction and stupidity (I should have rushed her to a vet as soon as I got up on Saturday), Angel has crossed Rainbow Bridge early Saturday evening. Even if her injuries were too far great for medical intervention, they could have at least given her something to make her comfortable during the last few hours of her life.

I have learned a painful lesson on the care of injured piggies.

To the previous page . To the next page of memorials.

If you would like to post a memorial to a special guinea pig companion, please e-mail it and a picture (if you wish) to Memorial -at- GuineapigsRainbow.org